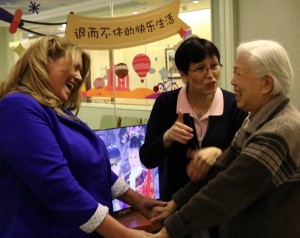 I leaned in and asked the former zookeeper, “Which animal in the zoo was the most difficult to care for?” She responded “The monkeys” without hesitation and with a knowing sparkle in her eye that wordlessly conveyed that she knew more than a little something about this topic. She quickly added that the reason she chose monkeys was because “they are always SO naughty!” before her face gave way into a huge grin as she drew me closer.

The gesture seemed to invite me to join her in visiting the many memories that make up her unique personal history as much as I was welcomed into her affectionate physical embrace. Her eyes searched my face as her fingers touched my cheeks in a familiar maternal gesture.

Though right in front of me, I could tell she also seemed to simultaneously occupy two “Moments in Time®”. As she studied my expression, she was both looking at me and past me in the same moment. Seeing both the face in front of her and concurrently experiencing something beyond this moment beckoning her to glimpse in her minds’ eye the vivid images and feelings of the decades old chapters in her life story that we were just speaking about.   In this moment, long dormant days once feared forever lost to dementia were once again accessible to her.

After a time, I asked the Mother of two “which was more challenging, raising children or caring for those monkeys?” her grin gave way to a giggle as she immediately answered, “Children! They are much better at being naughty than monkeys!” We nodded and laughed in the kind of conspiratorial way that happens when life-long friends share an inside joke about something that no one else should know. She and I laughed heartily and hugged each other tightly before she kissed my cheek and we parted.

To a passerby, witnessing this brief exchange may have seemed unremarkable. But what made it anything but ordinary was both where the conversation occurred and who the two women were that were having it.

The former zookeeper I was visiting with is an 80+year old resident of a specialized memory care program in Beijing, China that didn’t speak any English. I met her briefly while in China to learn more about Alzheimer’s impact there and spoke to her through a translator.

China has the world’s largest population of persons affected with Alzheimer’s, currently estimated at 9.2 million. According the World Health Organization (WHO), one out of every ten persons with Alzheimer’s worldwide will be a Chinese national living in China.

For decades, China’s family planning laws have permitted only one child per couple in many parts of the country. That policy has brought about a shortage of adult children caregivers. Additionally, the number of aging parents in China is growing at a record breaking rate. Currently an estimated 177 million people aged 65 and older live in China, which is home to the largest number of seniors in this age bracket in the world.   By 2050, the Chinese proportion of elderly will reach 30.4% which will include 100 million elderly people over 80 years old, and is why China is considered the epicenter of the worldwide Alzheimer’s epidemic. The former Peking zookeeper I had just been visiting with is one of the people represented by those staggering statistics.

Though she and I live more than 7,000 miles apart, she is 36 years older than I am, we don’t speak the same language, have a world of difference (literally) in what we consider familiar songs, foods, clothes, career, culture, custom, commerce, government, family life, and just about everything else. It’s likely I don’t look like anyone she has known either with my blue eyes and blond hair potentially making me very unfamiliar. We met for the first time minutes before that conversation took place and she had no reason to feel comfortable with me, yet she did.

In those few minutes with a foreign stranger (me), she laughed and joked and reminisced and smiled and hugged and if her body language is any indicator, she enjoyed our connection every bit as much as I did. I’d like to think we both instantly felt like friends.

Dementia didn’t rob her of her humanness and on that level, we had everything in common we needed to relate to one another.

The meaningful interaction she and I shared was made possible by an incredible relationship between Meridian Senior Living (www.meridianseniorliving.com), a US company known for their highly praised and very person-centered Moments in Time® Memory Care program and Senior Living L’amore (www.chunxuanmao.com), a Chinese based Assisted Living company crossing the cultural divide to collaborate in creating some of the first examples of person-centered dementia care for the aging in Asia.

My new friend and I were able to share that moment of connection because of the dementia care program Kacy Kang, Principal and CEO of Meridian Senior Living and his team passionately offer. He insists that “each resident be considered a person not a patient”. He adds. “The key to our providing the very best possible care is creating a very person-centered approach to both care and interactions rooted firmly in each person’s unique life story. Kang notes that “Our Moments in Time® program is dependent on partnerships between residents, families and staff who collaborate continuously to incorporate the most important parts of each person’s history in a way that’s still accessible at each stage in the disease process.”

Prior to meeting my newest friend, I was allowed to learn her life story so that our visit would be more meaningful for her. The Meridian trained Chinese senior living staff are cultivating memories with as much reverence as managing medications and following physician’s orders, and as such, they were able to help me help her have the most satisfying social interaction because I knew what she liked to talk about.

Meridian’s senior staffers have been immersing themselves in Chinese culture, spending much time in Beijing supporting the development of a Chinese language version of their American Moments in Time® Program, which is built upon many of the values that the United States National Dementia Action Alliance (DAA) also works so hard to champion here at home.

The Dementia Action Alliance is committed to helping people live fully with dementia and supporting those who care for them. The DAA is a volunteer coalition engaged in changing our nation’s understanding of and attitudes about dementia through serving as a trusted source for education, conversations, and advocacy. In changing the attitudes of our nation’s citizens they are also finding international support from person-centered care providers who have long advocated for making this type of care more universally available after seeing first-hand the successes these approaches create.

The DAA understands that person-centered care helps make life better for someone living with dementia and for those who care for them. “People living with dementia and those who support them face many challenges. Besides managing cognitive and physical changes to their health, they deal with isolation and stigmatization because negative information about dementia is the norm for public information. Society’s widespread negative perceptions fuel fear, misunderstanding, and add to the burden of living with the condition. It does not have to be this way.” shares the DAA’s website.

Global grass roots efforts are now gaining momentum around the same goals.   To find out more about how you can get involved in helping myself and the other volunteer members of the National Dementia Action Alliance help people live fully with dementia while supporting those who care for them, visit the DAA’s website: http://daanow.org/ today.