Side-by-side events uplift people with dementia and their caregivers

DAA thanks Jonathan Streetman, Health & Social Service Reporter, and The Herald Times for allowing us to re-post the following article:

On Valentine’s Day, cards created and given by a loved one can say much more than the words inside them.

At Jill’s House Memory Care, a facility for individuals with memory problems such as Alzheimer’s disease and other types of dementia, residents were able to make Valentine’s Day cards for loved ones to say the words they may have trouble saying now. 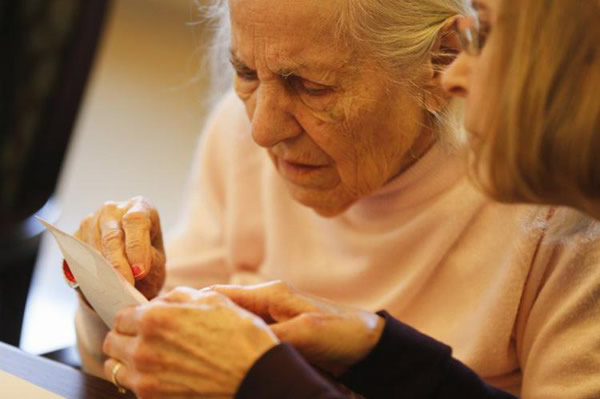 While the residents made cards, their caregivers — family members who give so much of their own time and energy — met in a support group and were able to talk openly about the challenges they face, with people who understand what they’re going through.

The side-by-side support group/card-making event was the idea of Heather Kinderthain, Jill’s House community relations coordinator, and Leon Olenick, bereavement coordinator at SouthernCare Hospice. Olenick’s wife, Jackie, used her skills as an artist to help the residents create their cards.

Events in which not only the resident, but also the caretaker are taken care of are crucially important, Leon Olenick said.

“Caregivers need attention, too,” he said. “Caregiving can be a very isolating thing. It’s important for them to know that they’re not alone.”

Tuesday’s event was the first of a monthly series of side-by-side events that the Olenicks will lead. Every second Tuesday of the month at Jill’s House, free and open to the public, Jackie Olenick will help residents and members of the community who have memory-related illnesses to create an art project while Leon Olenick leads the support group.

The Olenicks have created a few memories of their own over the years. After meeting Jackie when she was 12 years old, Leon, 14 at the time, was pretty sure he’d met the love of his life. When she turned 18, he married her.

“Instead of buying each other a box of chocolates or something like that, we decided this was a much better way to spend our Valentine’s Day,” Leon Olenick said. “We’ve always found that when you give back this life, it enriches your own life that much more.”

“There’s nothing else we’d rather be doing today,” Jackie Olenick added.

While Tuesday’s event was the first of this kind, Kinderthain said Jill’s House has done similar events in the past, and they’re always beneficial to everyone involved, residents and caregivers alike.

“One of the best types of mental stimulation is creativity,” Kinderthain said. “If a resident wants to learn to play the piano, we help with that. If they want to cook their eggs in the morning for breakfast, we help with that, too. Creating cards that they can send to their loved ones is another great activity that stimulates brain activity.”

Jackie Olenick said making Valentine’s Day cards was the obvious choice for the project this time.

“It’s a project that can easily have a successful outcome,” she said. “And it’s a memory that doesn’t go away. They can send it to someone, and that memory is physical, it can be kept.” 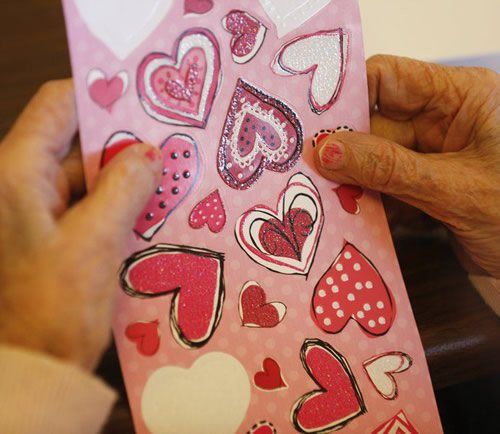 Jan Bays, both a caregiver and director of program development and education at Jill’s House, said it was great that several caregivers joined their loved ones for lunch and conversation before breaking off into groups.

“I think that care partners feel guilty about tearing apart from the person that they’re caring for. Because of that, they might not get out as often as they used to, and could feel like they’re all alone. Things like this keep people from feeling isolated,” Bays said. “It’s so important to get out and socialize with others who know what you’re going through, and to receive the support that can offer.”